Without having participated in the crowdfunding of SHINESS: The lightning Kingdom, I was eager to acquire this small independent RPG as soon as it was released.
Good or bad choice according to you?
In my opinion..

“One day, a Shiness, or spirit of the earth, appears in the eyes of the young Chado and asks him to help him to find the kingdom of light …
Taking his courage with both hands, and his best friend Poky, he goes on a quest for the promised land … ”

And it’s an elected, there’s a bad empire, magic (shi) different elements and a big bad guy who has black shi, and worse treason, drama all in a fantasy world with flying boats …

Put like that end to end, it does not breathe in any case the novelty and originality!
And that’s the case … BUT, the whole thing also has a lot of passion and the desire to go back to classical bases by proposing a colored and quite worked and friendly universe.
However, it is difficult to provide a coherent sequence of events, and arrives at some sluggish typical Shonen manga scenarios.
The end is not really one and call for a continuation that deserves to be developed …
In 22h of play, the adventure takes off rather well, but we have a small feeling of unfinished but which, fortunately, does not lead to any real frustration (from my point of view, and I hate games that end with a ” to follow “, you can believe me!) 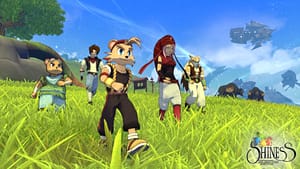 The cool stuff from SHINESS: The lightning Kingdom

+ Some fights against bosses are even pretty epic 😀
+ The proposed universe is quite large and offers a variety of environments.
+ Graphically very correct, and very colorful
+ The story is pretty cool, besides having good dubbing
+ A lot of power to unlock
+ Not very invasive side quests
+ Full backup that gives life all over the place (and it needs it)
+ Enigmas accessible but not necessarily too simple
+ The soundtrack is really nice
+ The process: Finally a crowdfunding that resulted in a finished game and faithful to the promise 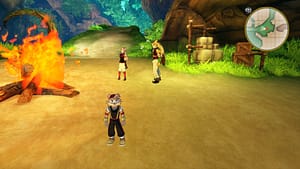 – The combat system that will quickly show weaknesses / limits and make you rage when you are going to be chained with nothing to do or understand anything that happens on the ground … some fights really made me scream!
– It clearly lacks finishing: Walls invisible everywhere, crash bug, the blow of losing life if you jump in a lift (true) …
– The Chara design very very very uneven between artworks, models and cinematics … we go from friendly to very very ugly!
I do not understand that a selection to keep only the qualitative has not been done.
– The menu interface to manage spells and inventory is quite unintuitive and very very heavy.
– The under-exploitation of the field powers of certain characters.
– The classic archi design level and a lot of going back pretty useless to increase the service life 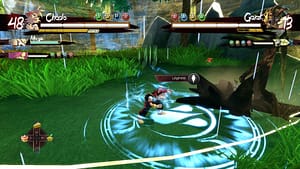 The things to throw

– The fucking blocking bug that can go so far as to make you lose your backup if you have not thought about having multiple slots …
phew, this is not my case (many slots permanently) but I lost several hours of games with one of these bugs, and by informing me, I saw that there were several!
– Platform phases … a horror of inaccuracy … Not disturbing if it was not mandatory at times!

Summary of the adventure!

Shiness is far from a MUST HAVE RPG to do absolutely.
This remains a good surprise, however, that I enjoyed ending up encouraging independent productions that deserve to be praised when the work as a whole is of high quality.
So if you too want to participate in the booming small studio, go for Shiness 😀